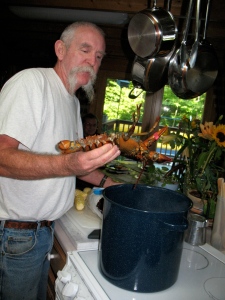 My husband helping to prepare a lobster dinner

I think it is fair to say that my husband had even less experience in the kitchen than I did. He and his brother were the only children of a mostly stay at home mother. He was definitely an outside kind of guy, active in scouts, hiking, diving, you name it. What limited cooking skills he gained were through scouts and camping. His signature dish when we first met was bacon and beans which he prepared by frying up bacon and then adding a can of beans to complete the meal. He also learned to BBQ chicken when he worked at Boy Scout camp as a teenager. And, I should add, he worked for a time with a caterer while in college.

Our first home together had a very small kitchen and he was more than happy to leave me to my own devices while I  got acquainted with the process of preparing a home cooked meal every night. He was always willing to help and would occasionally make gentle suggestions on how something might be improved to make the meals tastier or the presentation more appealing.  I wasn’t always receptive to his ideas for improvement and I often took them as an affront to my efforts.  Eventually, I realized that I was fortunate that he wanted to be involved in the meal preparation process and learned not to dismiss his suggestions out of hand. Turns out he was much better than I at setting an attractive table. He got me to branch out from the reliable, but bland foods that I grew up eating and to experiment more with unfamiliar ingredients like venison, tofu, scallions, mussels, and polenta. My cooking improved and so did our kitchen relationship.

But when my husband retired two years after me, he took a  renewed and increased interest in the dance of the kitchen. I was reluctant to allow him more creative control in what had become my comfortable domaine. At the same time, it was hard to deny that it would be nice to have help with meal planning, preparation, and clean-up. It wasn’t easy at first but we soon learned where  we each fit in to this new dynamic. We often share in the prep work, knowing each other’s strengths after so many years together. Usually one of us cooks the meal, the other does the dishes and clean-up.  He is actually better at certain meals than I am so I glad to have the break and allow him to take the lead. I am not saying that there are not disagreements now and then on the best way to do things, but we have learned to appreciate each others skills and talents in the kitchen. And it remains one of our favorite places to be.