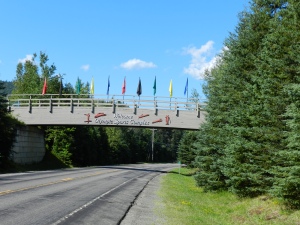 I just finished watching the hockey game between the United States and Russia. Playing in his first Olympics, T.J. Oshie of the St. Louis Blues converted four of his six shootout chances to seal the win for the United States. With the next Olympics four years away and talk of no longer allowing NHL players to participate in future Olympic competitions, this could very well be the only chance for Oshie to make his mark in this most elite of international competitions. While this was only a qualifying round, I am sure the shootout be remembered for years to come. T.J. Oshie has certainly taken advantage of his Olympic moment.

Not being an elite athlete it is certain that I will not have the opportunity to have an Olympic moment in competition. But I did find a way to have an Olympic moment of my own nearly 38 years ago. I had always dreamed of attending the Olympics but as a college student the cost of international travel alone made that seem out of reach. When I learned that the summer games were to be held in Montreal in 1976 the summer between my graduation and the start of grad school, I began to formulate a plan to make my dream a reality.  I had a 1972 Pinto station wagon that I could drive the 3000 miles from California to Montreal and I had a couple of part time jobs that allowed me to squirrel away money for gas and food. Still there was lodging and tickets to consider.

The tickets were fairly easy to acquire as Montgomery Wards, a popular department store at the time, was handling sales in the US. There was a store near me and I picked up four tickets each to preliminary rounds of swimming and diving and basketball and a track and field event that included a couple of finals. By today’s standards, they were reasonably priced, the most expensive being the finals which set me back $22 a piece as I remember.  I recruited a friend from college and two of my cousins from Minnesota (that we could pick up and drop off along the way) to help with expenses. Thankfully, my traveling companions agreed to camp along the way in a four person tent that I had bought and cooking most of our meals on a camp stove. We stayed at a youth hostel while in Montreal and took the subway over to the venues. It was a wonderful adventure and one that holds a special place in my memories.

I had the opportunity to attend the Olympics again in 1984 when they were held in Los Angeles, near where we lived. The ticket prices had risen but the travel was minimal and we could sleep at home in our own beds at night.  I was married then and had given birth to our son just months before the games. So his Olympic moment first happened at just 5 months of age at the water polo venue at Pepperdine University. Who knows if he will have another, but he did not miss his Olympic moment. You may not dream about attending the Olympics, but don’t miss your moment for whatever passion you hold.