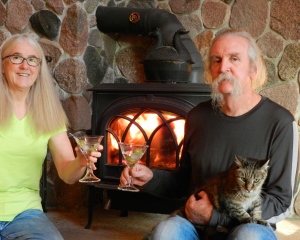 We lost a treasured part of our family just after dawn this morning when Cat passed away in her sleep. Cat was with us for nearly 16 years, and made the cross country move with us in the cab of a rental truck from Southern California to Central Maine in 2007. It was only the second time (that we know of) that she had been in a motor vehicle of any kind. The first was when we took her to the vet to be spayed shortly after we took her in as a skinny, young kitty that was begging not only for food but also a bit of affection. My employees found her alone and whimpering behind the Post Office where we worked. None of them felt they could bring her home but they couldn’t bear to turn her away either so they called me at home and implored me to consider adopting her. I had every reason to decline as my husband Don was away on a big brush fire, I had just picked up Felix, the exchange student who would be living with us for the next 9 months, and we already had adopted a big German Shepard mix that had no experience living with a cat. I had no experience living with a cat either, but when I saw how frail yet friendly she was I just couldn’t turn her out.

The kids took to her right away and Zeke, our rescue dog, seemed to accept her presence just as we had his several years earlier. They named her Jake assuming she was a he (no one had bothered to check). When they later learned that Jake was a female cat, we all just took to calling her Cat or the cat and that’s the way it remained for the rest of her life. She never seemed to mind. Don reluctantly accepted her into our home with the understanding that she would primarily live in the garage and earn her keep by insuring the mice population was kept in check. That didn’t work out quite as well as planned. She had no trouble catching the mice, it was the killing part she didn’t quite grasp. She would bring them into the house, still very much alive, and fling them about so she could relive the chase. By the time the kids left for college and we moved to Maine she was a full time house cat. Though she did go “upta camp” on the second floor of our oversized garage where she could watch the birds from the large barn door every summer. During the winter she was most content on the hearth behind the fireplace. She was never outside, save for the rare occasions she escaped when the garage (or house) door was left open a bit too long. Although, one time she did jump from the second story barn door when we were away (our neighbors found her and put her back in the garage …with the barn door shut). But she was a cat who loved being around people and would happily come when called and would greet friends when they came to visit. A happy cat.

It’s hard to say when we first began to notice the decline in the Cat’s health. She started looking somewhat thinner around Christmastime. She stopped eating the kibble that she had always enjoyed, though she didn’t seem to be otherwise stressed or in pain. We started giving her canned food and that worked for a while, but eventually she lost interest in that as well. The last two weeks she has only taken passing interest in nutrition, occasionally licking the gravy off her Fancy Feast, or lapping up a small dish of Lactaid milk (the regular kind seemed to disagree with her stomach). This weekend she stopped eating altogether and would only drink a bit of water. I think she had resigned herself to go out on her own terms. She spent the last few days snuggling and saying goodbye to Don and I. Sometime in the night she rallied the strength to make her way toward our bedroom. Don heard her struggle and gently picked her up and placed her on a rug in our bathroom (where she sometimes liked to hide out when it was too warm). When I went in there a couple of hours later, I could barely feel her breathing when I found she had managed to move herself to the cool tile floor. As I picked her up, her mouth opened slightly as if to purr, but no sound came out. I placed her on a clean, fluffy towel. That is where we found her this morning. I can’t say for sure where pets go when they die, but I do know that they stay in our hearts forever.