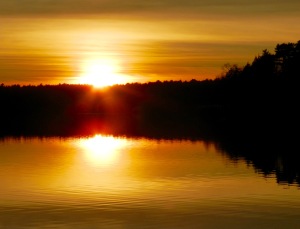 Sunrise …each new day provides the opportunity    to share a little of yourself.

A little later this afternoon, we will head over to the Newman center at the university for the Ash Wednesday Mass. Near the end of the service the priest and the eucharistic ministers will dip their thumbs in small bowls containing the burnt ashes of last year’s Palm Sunday fronds and make a small cross on the forehead of each parishioner as they file by. These crosses symbolize our belief that God created man from ashes (dust) and that our bodies will return to dust after we die. This traditional start to the Lenten season also represents grief for personal sins and a symbol of repentance.  The six and one half weeks between Ash Wednesday and the arrival of Easter, marks a period of abstinence and fasting for many Christians. In the simplest of terms means only one full meal and no meat on Ash Wednesday and on any Friday during Lent. Many Catholics also choose to give up a single indulgence (e.g.,  wine, chocolate, or TV viewing). All these traditions help Catholics to reflect on the sacrifices Christ made for us all.

I was not raised in the Catholic faith but came to it rather later in life. My husband grew up in a strong Catholic family, was an alter boy for several years, and attended parochial  elementary and high schools. His older brother is a priest. When we married thirty some ago and decided to raise our children as Catholics, I began my education into the nuances that separated the protestant faith that I had grown up with the tenets of his religion. Fasting and abstinence took a while to get used to. Occasionally I would forget about the “no meat on Friday during lent”, especially when I was having lunch at work. A few years of the St. Clare Friday Fish Fry’s along with McDonald’s Filet ‘O Fish specials helped cement the ritual. I was less consistent (and faithful) about giving something up for Lent.

The fact is, giving something up for Lent always seemed to be less meaningful for me. It was almost like those New Year’s resolutions that fall by the wayside just a few weeks into January. I found that whatever I gave up, I just replaced it with more of something else. So in the end it wasn’t much of a sacrifice. Somewhere along the way, I found another way to make a meaningful contribution during Lent, not by giving something up but by giving something of myself. It started with just finding little ways to be nicer to people that I interacted with on a daily basis. Letting friends know that they were important to me, listening more and talking less. In recent years it has morphed into a campaign to stay in touch with those whose I don’t get to see often. For each day of lent I write and send a card or letter to someone I care about. I ask them how they are doing and tell them a little about what is going on in my part of the world. I don’t feel like this is a sacrifice, but certainly more worthwhile to me than giving something up. This is one Lenten tradition that I intend to keep.