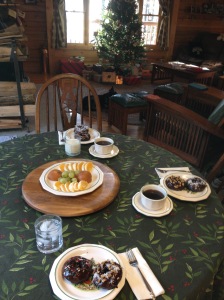 Homemade chocolate donuts with a side of fresh fruit for breakfast on Christmas morning.

Aristotle is thought to have been the first advocate of moderation in all things. Since then, many have adopted their own take on this philosophy allowing for an increasingly diverse understanding of what moderation means. Some self righteous crusaders hold very narrow view of moderation, especially when it comes to their particular field of study or interest. Rather than promoting a healthy middle ground they advocate for the complete elimination of whatever they see as an impediment to the attainment of their ideal. And on the other side, there are those who are willing to throw conscious to the wind …if it feels good do it, life is short, and I’ll worry about tomorrow tomorrow. Personally, I believe that moderation means just what it sounds like …neither too much or too little, or too often or too seldom. I have always tried to find a balance between the extremes, especially when it comes to issues like diet, exercise, work and family. It can be a struggle and I know I don’t always get it right.

The other day when I was at the gym, cooling down at the end of my workout and listening to the radio through my ear buds, a story caught my attention. The DJs began to talk about a recent internet article called 30 Foods You Should Never Eat After Age 30. Though I am well over thirty, I was curious to learn what made the list and why. Some of the items discussed were very specific, like Pop Tarts, Diet Mountain Dew and Fresca and veggie burgers … foods I haven’t had in years. Others, like flavored yogurt, bagels, and bacon I do eat occasionally and enjoy. After I showered and returned home, I called up the list on the computer as well as some other recommendations for people over fifty. Both lists included a few of my guilty pleasures, hot dogs, Oreos, and Bacon none of which I have more than a couple of times a month. I recognize the importance of good nutritional choices in maintaining optimal health, but I am definitely a proponent of a healthy respect for moderation rather than complete elimination in that pursuit. There are lots of foods on all these “do not eat” lists that I never eat but that’s mostly because I just don’t like them.

But as I mentioned earlier, moderation has a continuum whose end points not even the experts agree on. Take wine for instance. It is pretty well accepted that wine in moderation can contribute to one’s overall health. The same has also be said of dark chocolate. What a lucky coincidence that those both are also among my guilty pleasures. My husband and I enjoy a glass of wine with dinner and another glass of red wine and dark chocolate later in the evening while we watch a movie or TV program. We have the same doctor and she is fine with this tradition as far as my husband is concerned but tells me the second glass is too much. There is some evidence that women do in fact metabolize alcohol differently than men. However it is also true that the recommendations for beneficial limits on daily/weekly wine intake are based averages rather than specific individuals. Not all women are the same size, shape, or have the same health concerns. And neither do men for that matter. So for now it is a risk I am willing to take as long as my annual physical exam results are favorable. All things in moderation.