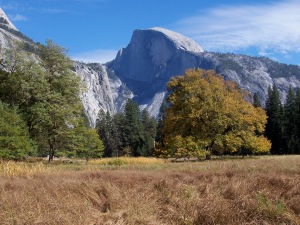 Half Dome in Yosemite National Park

The United States National Park Service is celebrating it’s centennial this summer. It was created and signed into law by President Woodrow Wilson on August 25, 1916, over 43 years after Yellowstone became America’s first national park in 1872. During those intervening years, several other sites, largely in the West, were also designated as worthy of protection because of their unique landscape, national heritage or historic significance. However many difference agencies had administrative control over these government parcels. In order to provide unified management of these parklands, the National Park Service was established within the Department of the Interior to provide oversight, protection and development for public access. One hundred years later there are more than 400 parks, monuments, seashores, rivers, battlefields and other historic sites that have been preserved for the enjoyment of all Americans. They cover 84 million acres across all 50 states, the District of Columbia, American Samoa, Puerto Rico, the Virgin Islands, and even Saipan in the Northern Mariana Islands. Fourteen are World Heritage Sites. I consider them all treasures and have visited many of them over my 60 plus years, but I consider the 58 National Parks the jewels in the crown.

My first trip was to one of the nation’s oldest parks, Yosemite, with my folks when I was just a young child. Yosemite was not an unlikely destination as it was just a few hours north of our home in Southern California. There is no denying the natural beauty of the park but it was all the more special knowing that my parents spent part of their honeymoon in the historic Awahnee Hotel (now known as the Majestic Yosemite Hotel). Traveling as a family, my folks chose the more affordable cabin tents in Curry Village. Until 1968, it was a tradition that every night a large bonfire would be built at Glacier Point, 3200 feet above Yosemite Valley. By 9 PM all the campers would gather in Curry Village and shout “let the fire fall”. In response, the hot embers from the bonfire would be swept off the side of the mountain to create a spectacular “firefall” to the valley below. By the time my husband and I brought our own children to Yosemite more than 20 years later, firefall had long since been discontinued. That did not lessen our enjoyment of the parks natural wonders like Half Dome, El Capitan, Vernal Falls and Tuolumne Meadow. We camped in our Volkswagen Van.

Over the years, we visited many more National Parks when our children were living at home. I like to think we helped to develop their love and respect for nature. Even with our kids grown and on their own, my husband and I try to include one or more National Parks on every driving vacation we take. Occasionally, we will make reservations in one of the Historic Lodges like the Old Faithful Inn in Yellowstone, El Tovar at the Grand Canyon or the Crater Lake Lodge in Oregon. But more often we will stay in one of the parks’ campgrounds in our Leisure Travel Van. We will hike the trails, walk along the beaches, puruse the exhibits at the visitor’s center, and just enjoy what each park has to offer. Shortly after I retired in 2005, we took a camping trip to Yosemite where I first learned about a small book called Passport to Your National Parks. Not unlike it’s namesake, it allows you to collect cancellations from all of the 400 plus sites in the system. It is divided into nine separate regions and includes lists and location maps of each park and a brief description of some of the more significant historic sites so that you can find ones that are close to your line of travel. I have two books that are nearly full and recently purchased the Centennial Edition when we were at the Point Reyes National Seashore this spring. There’s a park (really several) for everyone, so get out there and explore.