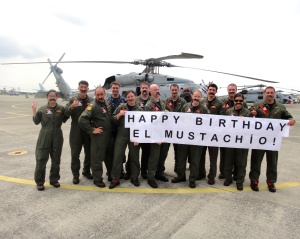 My daughter and her fellow Naval aviators put together this Facebook posting to wish her dad Happy Birthday in 2013.

It’s hard to believe that Facebook, the ubiquitous social media site, has only been around for a decade or so. In 2003 Harvard college student Mark Zuckerberg and friends created a simple game of “hot or not”, offering side by side photographs of classmates and asking the “players” to choose which of the pair was more appealing. The fact that Zuckerberg may have illegally accessed the Harvard student records to acquire the photos used did not derail the momentum he created for a new way for students to connect with each other. Facebook evolved rapidly. Prior to 2006 , the website required an invitation to join and was primarily populated by college students,  and later, high school students who had been invited by their college friends and relatives. The exponential growth began on September 26, 2006 when it was decided that anyone 13 years of age or older with a valid e-mail address was free to join. Today it is estimated that more than 1.6 billion people worldwide visit  Facebook at least once a month.

I joined Facebook in 2009, after both of my children had graduated college. Prior to that I had always considered Facebook a young person’s website, something that allowed them to exchange photos and conversation that they didn’t necessarily want to share with their parents. And there was a bit of a learning curve for these early adopters regarding the consequences of introducing personal images or information on line. Some graduates discovered that potential employers were mining their Facebook pages to help make decisions on the suitability of their applicants. Other were embarrassed when photos they believed just their friends would see ended up going viral, and that wasn’t always the welcome thing it is today. Although I felt I had benefitted from the lessons provided by the early adopters, I still wasn’t sure it was something wanted, or needed, to be a part of. But we had moved away from California a couple of years earlier and I missed the regular  interaction with my friends and family there. Also, my children’s careers had taken them far away as well. It was old friends out west who encouraged me to join them on the website. And so I did with the caveat that I would only become friends with people I knew and had a face to face relationship with. To my great surprise and pleasure, my kids were two of my first “friends”.

I enjoy seeing photographs of friends and family, hearing about their adventures, their triumphs and every day activities. I like being able to share my own photographs and thoughts with those to whom I feel close. I try to be honest in my likes, comments and replies and hope that my friends are as well. Facebook is also a good way to share information about community events and discover new vacation, craft or cooking ideas. It gives everyone a chance to be part of a larger community. As much as I enjoy staying in touch through this platform, I don’t consider it as a replacement for more personal interactions such as a visit, a phone call, or a letter.

But there is also an ugly side to Facebook. I accept that the “paid placements” or advertising are a necessary evil, but those don’t bother me nearly as much as the preaching that some feel they are obliged to provide. I not just talking religion, although all those posting that imply that my eternal salvation is dependent on my typing AMEN before scrolling are especially annoying. Politics and political posturing also seem to be gaining an unwelcome foothold. Many of these postings are not just uninformed but contain outright lies. The vitriol that is spewed in the hopes of swaying someones opinion falls on deft ears and adds nothing of value to any intelligent discernment. I would welcome the departure of these postings from Facebook.

I recognize that Facebook is a business and as such is market based. But as a consumer, I can and do choose to avoid (or scroll past) those postings that do not appeal to me. I just wish I didn’t have to so often.