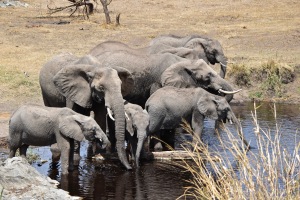 A herd of elephants stop at a Serengeti water hole  to take a drink.

Out of Africa is the title of a memoir by Danish author and artist Baroness Karen von Blixen-Finecke which much later became a movie starring Robert Redford and Meryl Streep. First published in 1937, it recounts von Blixen’s 17 years in British East Africa. She and her husband bought several thousand acres of farmland in 1913 and eventually developed them into a coffee plantation as demand caused by World War I drove up prices for the tasty beans. Sadly, both the plantation and the marriage eventually failed and von Blixen returned to Denmark. In 1964 the Danish Government donated the house and property to the newly independent country of Kenya and it was designated a National Museum in 1986. As we drove to the museum from our hotel in downtown Nairobi, we passed the slum of Kibera, a ramshackle jumble of corrugated metal, plywood and mud dwellings where 80% of the residents have no electricity and even less have running water. The house/museum is located in “Karen”, an upscale suburb of Nairobi, where homes are priced upwards of a half a million dollars and are fortified with high walls topped with spikes and even broken glass. They appear in stark contrast to the dusty, unlandscaped streets on which they are located. The Karen Blixen House was the first stop on our recent trip to Africa. We went to Africa to see the animals, but early in the adventure we were witness to a not so subtle reminder that in Kenya, as in many of the African nations, there is a clear separation of the haves and have-nots.

Later that same day we visited a giraffe rescue center and an elephant orphanage, both located in the same Karen suburb, but with a decidedly more inclusive feel. The following morning we left bright and early from our downtown Nairobi hotel and headed for the Amboseli National Park where we would spend the next two nights and experience our first safari drives. With camera at the ready, we left the gated compound of the hotel before dawn in specially equipped Land Cruisers with roofs that extended upwards and allowed us to stand and have and unobstructed (save for heads of our “jeepmates” who were often jockeying for the best position) views of any wildlife we might encounter. And encounter we did. We were barely outside the gates when we caught our first glimpse on zebras, then elephants, followed by gazelles, wildebeest and birds of all types and sizes including pink flamingos off in the distance. We saw shy hippos lounging in watering holes well off the road and yellow baboons walking on the road just in front of our vehicles, some carrying their young on their backs. I couldn’t take enough photographs and I took too many. Don reminded me to just enjoy watching the plethora of animals that wandered unthreatend by the intrusion of our vehicles.

Over the course of the next week and a half we traveled a circuitous route that would take us south and west to Tanzania with stops in Arusha, Lake Manyara National Park, Ngorongoro Crater, Serengeti National Park and Lake Victoria (the second largest fresh water lake in the world) before returning to Kenya for our final safari opportunity in Masai Mara National Park. By the time we returned to Nairobi for our flight back to the states, we had no fewer than 15 safari drives where I continued to give my cameras a good workout but also learned to step back from the lens more often just to enjoy the experience of being in these incredible locations. The main reason we chose to come to Africa was to see the animals in the wild and we were not disappointed. We were able to see the big five (lion, rhino, leopard, elephant, and water buffalo) in their natural habit and so many more. But we got numerous cultural and life lessons along the way as well. We visited Masai and Iraqw villages, discovered talented artists, wood-carvers and craftsmen, tasted a local banana beer, toured the beautiful Gibbs Farm and coffee plantation, and explored Oldupai Gorge where Dr. Louis and Mary Leakey discovered humanoid fossils over 2.5 million years old. In spite of the difficulties faced by many of the folks we encountered, we found the Kenyan and Tanzanian people to be warm and generous and there was a unique beauty in the stark vastness of the countryside. I am thankful that we had the opportunity to make this trip and hope that we will be able to return again someday.