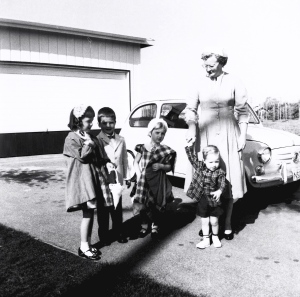 In our Sunday best. Ready to leave for church, circa 1959.

“OK Boomer!” I have been hearing that a lot recently. As far as I can tell, it is a derisive phrase used by younger folks, primarily Generation Z, to mock people in my age group or at least to express their opinion that Baby Boomers just don’t get it. We don’t know or can’t relate to the concerns they have about the world that they will be inheriting. In fairness, having grown up through the Cold War, the race riots of the 60s, the Vietnam War and the draft, the Dot Com bubble and the 2008 financial crisis has colored the way I and my contemporaries view the world. Gen Zers have also been  similarly affected by world and national events that occured during their lifetimes . They have had a front row seat to witness the climate change crisis, the spiraling cost of higher education, limited job security and benefits and the lack of civil discourse in today’s political climate. Those things have naturally impacted how they view their future. Many seem to feel that we Boomers are leaving it to younger generations to clean up our mess. Living in a college college community as we do, we come in contact with more young people in that age group (born in 1997 or later) than many of our comtemporaries.

I am not ashamed to admit I am a “baby boomer” as are all of my siblings. My sister Cheryl, the oldest, was born in January 1953, and the youngest, brother Mark was born in May of 1957. We grew up in the suburbs outside of Los Angeles. Mom was a nurse and Dad held a number of different jobs finally settling in as a mailman after we all started school. We were part of a burgeoning middle class that was expanding rapidly after World War 2. We were far from rich, but we had a lot of love. We were rasied to respect our elders and to work hard to get ahead. We were fortunate that a college education was affordable in California with community colleges practically free and State Universitity tuition that could be paid for with the proceeds of a summer job and or part time-work while in school. That is certainly no longer the case for most younger college students.  At the same time, when we arrived on campus we had little more than a suitcase full of clothes, a hot pot, a radio, and an alarm clock. Bikes were optional. Now we see the students moving into campus housing with big-screen tvs, refrigerators, video games, furniture and more. Just as my parents had different priorities and challeges than I had, so too does this new generation of young people.

And I guess that is my biggest objection to the whole “OK Boomer” thing. Every generation faces a different set of challenges and we should  recognize and respect that about one another. Using this new pajorative to dismiss someone else’s opinion as invalid because they don’t share the same priorities or values is both unfair and uncivil. That being said, it would be disingenious of me not to confess that I have thought, though never said, “OK GEN-Z stop scrolling on your phone while you are sitting on an exercise machine that I am waiting to use”. In all seriousness, I have no doubt that most of my comtemporaries do care about the world we will be leaving for our children and grandchildren. Perhaps we just don’t agree on what that means. Why don’t we try working together on that.